Interim measures and the forms of interim relief available before the UAE courts, was the topic of our latest seminar. Led by Chairman Ali Al Zarooni and Partner Areen Jayousi, the seminar was in association with the Oath as part of the GC Talks Series. 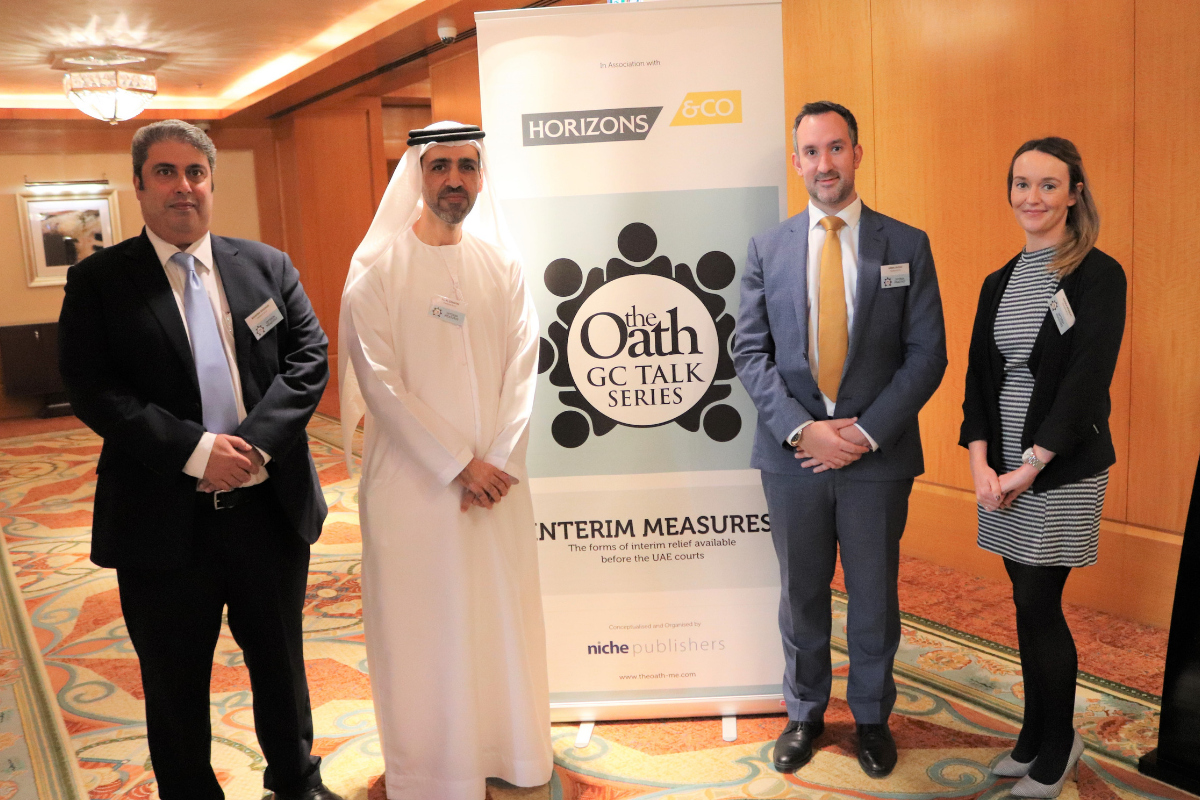 Areen began by explaining to attendees that interim measures are urgent measures which apply only in certain circumstances, such as; where there is an imminent risk of irreparable harm, in the event that the creditor fears loss of the guarantee of his rights or if the creditor holds a formal or informal unconditional deed of debt which is due for payment.

The session then moved on to a discussion on the specific interim measures, beginning with precautionary attachments and the attachment of a debtor’s property, Areen highlighted that a precautionary attachment is time sensitive and a temporary measure, as such once the summery judge grants an attachment order the applicant must back it up with a civil claim. The civil procedures must be filed within eight days, otherwise the precautionary attachment will be null in void. Areen reinforced how important this is, as he has known it to happen many times to clients. Attendees were interested to know what can and cannot be precautionary attached, Areen explained the majority of our clients request that we attach vehicles, commercial licenses and performance bonds, particularly our construction clients. It is not possible to obtain an attachment order against state owned assets, the debtor’s residence, clothes, furniture, food and fuel for a period of six months or the debtor’s salary. Areen explained that it is also not allowed to attach the debtor’s means to practice his profession or trade, and finally, that it is also difficult to obtain an attachment order against a UAE national as there is little fear of flight.

The next topic up for discussion was the travel ban, whereby a creditor can request that an order be issued prohibiting the debtor from travelling, in the event that the debt owed is over AED 10,000. Areen highlighted that a travel ban is an extremely popular interim measure, and that similar to a precautionary attachment whereby a civil claim must be filed within eight days of the travel ban being granted, otherwise it is null in void.

When speaking about site surveys, a lengthy discussion ensued between our presenters and attendees on the appointment of experts in a case and the weight of their opinion dependent on who has appointed them.

The session was interactive throughout and when asked about timelines, Areen stated that interim measure applications are usually a fast process and that clients tend to rush them. However, it is imperative they are done correctly will all of the relevant documents included in the application

The session ended with Ali discussing his experience of interim measures in the Dubai Court system.

If you would like to speak to our legal team on the topic discussed, or any other matter, contact us at [email protected] or on 04 354 4444.