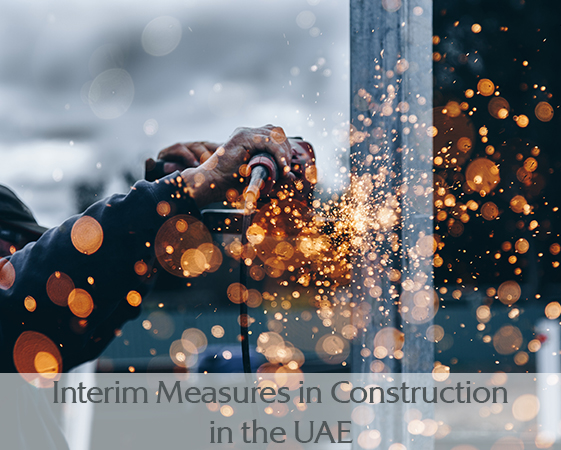 On Thursday, July 16th, Horizons & Co hosted a webinar together with The Legal 500 to explore interim measures in the construction disputes based in the UAE. The speakers included the firm’s founder and Managing Partner, Adv. Ali Al Zarooni, general counsel for some of the region’s most prominent construction companies (Marcus Khoury – Consolidated Contractors Company and Sean Yates – China State Construction Engineering Corporation), as well as the Registrar for the DIFC-LCIA Arbitration Centre, Robert Stephen.

After a brief introduction by the webinar’s host, James Wood (The Legal 500), Ali Al Zarooni opened the session, first with an overview of the firm followed by some preliminary remarks on the nature of interim measures and a list of the more common types of interim measures sought in domestic construction cases, namely: (i) precautionary attachments; (ii) travel bans; (iii) security for costs.

The firm’s litigation associate, Ingy Al Sharnouby, elaborated on the technicalities of obtaining interim relief from the local courts in the UAE, with a specific emphasis on applications for precautionary attachments against performance bonds. Ingy observed that many practitioners make the common mistake of seeking to freeze performance bonds by invoking the provisions governing interim measures generally (i.e., Article 111 of Resolution of the Cabinet No. (57) of 2018), as opposed to relying on  Article 417 of the Commercial Transactions Law, which specifically applies to these types of financial instruments. Ingy concluded her presentation with a discussion on the recent changes that Cabinet No. (33) of 2020 (Amending Certain Provisions of Resolution of the Cabinet No. (57) of 2018) made to this process, namely: (i) the requirement that a successful applicant of an interim measure must commence litigation within eight days from obtaining the precautionary attachment order where no case has been filed (Article 114); and (ii) the procedure that a respondent must follow to file a “grievance” to lift an attachment order (Article 60).

The second portion of the webinar was devoted to a lively Q&A, with questions from both the webinar’s host and members of the audience. The speakers were first asked about their practical experiences in dealing with interim measures, which gave the audience a 360 view of the topic as they received insight from practitioners (Ali, Justin and Ingy), general counsel (Marcus and Sean) and the DIFC-LCIA Registrar (Robert). The session concluded with a discussion on the inevitable impact Covid-19 has had on arbitrations, including the need for virtual hearings and the prolongment of proceedings.